To set the scene, two large American chains, Dunkin Donuts and Starbucks, attempted to start branches in Israel and failed. Israelis like their coffee Italian and a store for mainly doughnuts was not going to cut it here. Even more ironic, McDonald’s, while successful throughout Israel, had to alter their hamburger recipe (cooked instead on a charcoal grill) for Israelis to appreciate this popular restaurant. So let’s get down to the nitty, gritty street food loved and devoured by Israelis.

Pita, falafel, hummus, and Israeli salad
the most notable and well-known of Israeli food combinations. Take a warm, soft pita and coat the inside with a mash of creamy, smooth chickpeas (also known as hummus). Add recently fried balls of chickpeas (falafel) and finish off with a chopped mixture of fresh tomatoes, cucumbers, onions, and parsley. Be sure that the vendor is providing you with hot falafel for the ultimate street food experience. For no additional charge, ask to top off your pita with some chips (French fries), kruv (pickled cabbage), tahini, and harif (spicy sauce). Throughout the country, there are variations of hummus, some with za’atar (a green spice and sesame seeds) and others with ful (Egyptian broad beans). 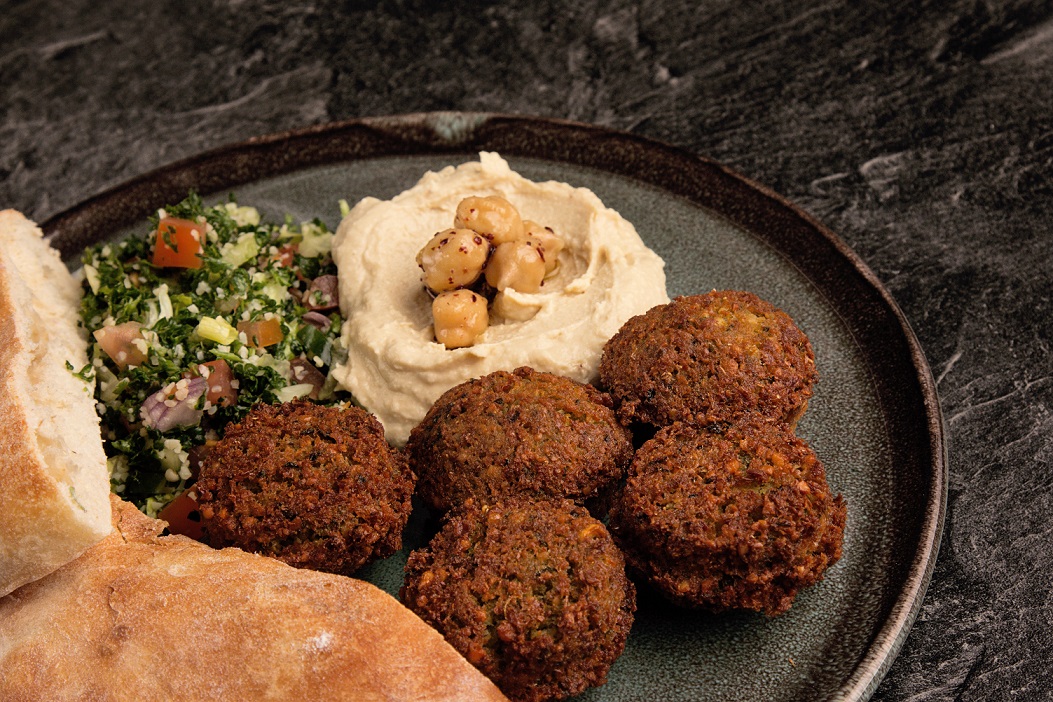 Sabich
To mix up your pita, request sabich instead of falafel. This fried eggplant dish originates from Iraqi-Jewish recipes and was traditionally served on the Sabbath. Sabich is accompanied by a hard-boiled egg, tahini, pickles, chopped parsley, and onions (may be seasoned in purple sumac). Sauce options may include skhug (a hot sauce from Yemen) or amba (a pickled mango sauce).

Shwarma
Add shwarma to your pita for some extra flavor and protein. Shwarma may include lamb, chicken, turkey, beef, mixed meats, buffalo meat, or veal.  The meat is cooked on a spit, grilled all day, and thinly sliced. To satisfy heightened hunger, order your shwarma wrapped in a laffa which is chewier and thicker than a pita.

Tunisian sandwich
Along the fried theme, try this big, fried bun filled with canned tuna, warmed potatoes, olives, pickled lemon, hard-boiled egg, and harrisa (a hot paste, made from chili peppers, paprika, and olive oil). Please keep in mind this dish is spicy! Worth a try but keep a cool glass of water handy.

Mixed Jerusalem grill
This street food is perfect for meat-lovers. It is a mixture of chicken hearts and gizzards along with other chicken and turkey. This dish is cooked on a hot griddle topped with spices such as turmeric and cumin.

Schnitzel
This dish originates in Austria and was brought to Israel by Eastern-European Jews. In Austria, schnitzel consisted of veal or pork. Due to dietary laws, schnitzel is commonly cooked in Israel using a thin piece of chicken. The schnitzel is first coated in breadcrumbs and then fried. Schnitzel is traditionally served with Israeli chopped salad and spicy mustard.

Boureka
Perfect for any meal, these baked, puff pastries are made out of flaky dough known as phyllo and can be found throughout Israel. Bourekas come in many shapes (round, square, triangular) and are usually topped with seeds. Bourekas can be stuffed with a variety of fillings, including: Bulgarian cheese, Tzfat cheese, za’atar, potatoes, eggplant, spinach, pizza sauce, or mushrooms.

Baguette
Israeli baguette sandwiches are shorter than the French version and can be filled with anything from schnitzel, tuna, hard-boiled eggs, omelets, or shakshuka.

Sambusak
This pastry was brought to Israel by Jews residing elsewhere in the Middle East and closely resembles a calzone. This delicious treat consists of triangular shaped dough, filled with pizza sauce and cheese and then baked in a clay oven.

Ice caffe
honorable drink mention - Although not technically a street food, ice caffe is a thick, blended milkshake that could be compared to the consistency of a Starbuck’s Frappuccino. Ice caffe is available throughout Israel and comes in many flavors including: traditional coffee, vanilla, strawberry, cookies and cream, hazelnut, and Kinder. If you are like me and don’t love the slushy taste of the ice caffe, you can order a regular cold coffee instead by asking for a “caffe kar.”

So get out there and try some of the great street food that Israel has to offer!