The Church of the Holy Sepulchre in Jerusalem

The Church of Holy Sepulchre plays a significant role in the Christian faith. It was built on the site of Jesus' crucifixion, burial, and resurrection. According to John 19:41-42, his tomb wasn't far from the place of execution. The Holy Sepulchre encloses the two sites of the grave and the crucifixion cross.

The History of the Holy Sepulchre

This church is located in the northwest quarter of Old Jerusalem City. It was first built and dedicated in 336 CE by Constantine the Great. The Persians burnt it in 614 and restored by Modestus in 616-626. The Caliph Al-Ḥākim Bī-Amr Allāh later destroyed it in 1009. Its rebuilding, and restoration was done by Constantine IX Monomachus, the Byzantine emperor.

The Crusaders later did a renovation in the 12th century. Since then, frequent rebuilding, repair, and remodeling have been necessary. What you see today dates back to 1810. 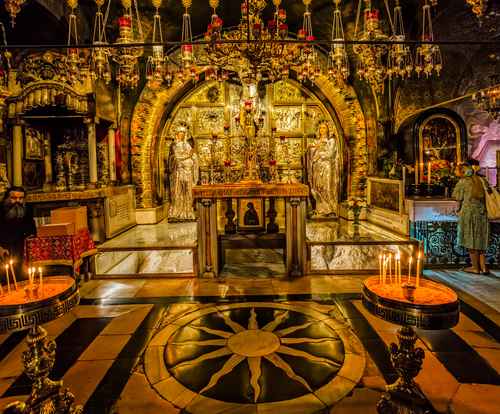 Who Owns the Holy Sepulchre?

Three Christian denominations share the ownership of the Holy Sepulchre. These include the Roman Catholics, Greek Orthodox, and Armenian Orthodox.

The Greeks refer to the Holy Sepulchre as the Church of the Resurrection or Anastasia's basilica. They own the central worship space known as the Greek Choir or Katholikon. Armenians lay claim to the underground chapel of St Helena.

The Roman Catholics, also known as Latins, own the Franciscan Chapel of Apparition. It commemorates when the risen Jesus appeared to the mother. Small Orthodox denominations like Ethiopian, Syrian, and Coptic churches have access to use certain areas.

The rights of use and possession are spelled out in a decree by Ottoman Turks in 1757, known as the Status Quo. The order bestows two Muslims the sole right to open and close the church. It's a tradition that dates back to 1246.

As a visitor, the church’s contrasting architectural design and styles might disillusion you. Don’t let this happen. However, most visitors wonder whether this is the exact site of death, burial, and resurrection of Jesus. Yes, archeological facts are there to support the claim.

What to See in the Holy Sepulchre

The church has a lot to offer. Every afternoon, the three groups move in turns from the Calvary to the tomb. If you check carefully, you’ll notice a difference in their chants, robes, and hymn singing.

Are you planning to visit the Holy Sepulchre this summer? Hire a car to facilitate your movement from the airport to the Sepulchre. It’ll also get you to your hotel and other amazing sites in the holy city.

Join us! car rental in israel with Shlomo Sixt